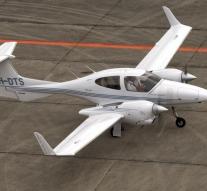 jesenwang - The two occupants of a light aircraft were killed Saturday when their aircraft crashed in Jesenwang, a village in Bavaria. Presumably a fifty man and his wife died in the crash.

Sunday the police could not confirm who were in the single engine Breezer. Eyewitnesses saw the device in the air went into a spiral and crashed. After the crash placed the aircraft on fire. About the cause of the crash is still officially unknown.