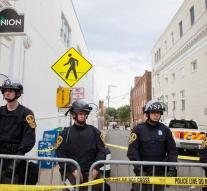 charlottesville - A police helicopter allegedly deployed in protests in the US city of Charlottesville was crashed out of town on Saturday night. Two passengers were killed.

The accident occurred about ten kilometers southwest of the city, reports The New York Times. The aviation authorities confirm the crash. There is nothing known about the state of the accident. The police are doing research.

A picture shows how the rear part of the helicopter hangs in a tree.