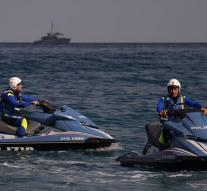 taormina - US President Donald Trump is the main participant in the G7 summit taking place in the Sicilian town of Taormina on Friday and Saturday. Leaders of seven major industrialized countries meet to discuss the world economy, foreign policy, citizenship and environmental sustainability.

It is for Trump his first top of the G7. This is also the case for the fresh French president Emanuel Macron. The arrival of Trump and the other world leaders is surrounded by extensive security measures. There are estimated to be 10,000 agents, military and special security forces. That's as much as the town's population counts.

In addition to the G7 countries Canada, Japan, Great Britain, France, Germany, Italy and the United States, representatives of the European Union and four African countries are present in Italy.