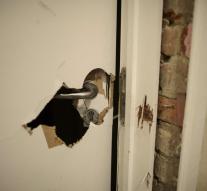 brussels - When the raids in Belgium Thursday as part of the investigation into the terrorist attacks in Paris have arrested two persons. A is seen as a possible suspect, the other is a potential witness. That the federal prosecutor said Friday.

The Belgian authorities seek with might and main to one of the suspected perpetrators of the attacks in Paris, Abdeslam Salah and his cronies or people who helped him. So far five suspects have been formally charged with terrorism.