Home / World / Two arrests due to Rock am Ring 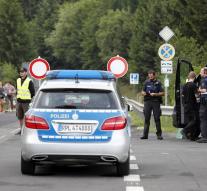 nurburg - Two people were arrested in Koblenz in connection with the interruption of the German music festival 'Rock am Ring'. The transmitter ARD reported on Saturday that the arrestors had a staff card for the festival. And one of them would be the family of a terrorist suspicion who stuck.

The festival was interrupted on Friday night because of a terror threat. It is not yet known whether the music venue is resumed and when a decision is reached. Minister Roger Lewentz of the Land of Rhine-Palatinate will hold a press conference at 11.00 on the interruption of the festival.

The three-day music festival started Friday at the race circuit at Nürburg in the Eifel. 90,000 lovers were expected. By sunset, the organization agreed with the police to suspend the event due to a terror threat.