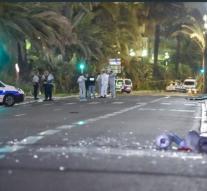 - Among the dead in Nice are also two Americans. The Ministry of Foreign Affairs in Washington finds out if there are cases in American casualties.

The Department urges Americans in Nice 'to directly contact family to let them know that you are safe. '

The bombing could also three Germans and a Russian were killed.