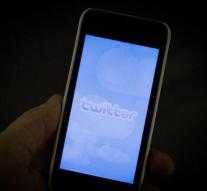 - Weblog Twitter has collapsed Tuesday night. After close of trading the stock fell 10%. has its second quarter recorded a profit of $ 0.13 per share. However, his outlook on the turnover in the third quarter is bleak.

The share slumped after trading hours, when presenting the quarterly figures by 10% in one.

Preceded analysts who follow Twitter nettwinst of $ 0.10 per share. The number of active users went to 313 million, which was last year in the same quarter 310 million.


The group is under fire because it touts insufficient advertising revenue and the influx of new users falters.