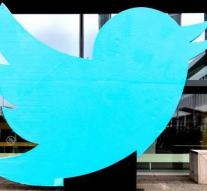 san francisco - Twitter has already closed nearly 300,000 accounts this year because of propagation of terrorism. These are accounts that encourage violence. In most cases, the accounts are linked to organizations considered terrorist by the international community.

The number of accounts closed, 299. 649 to be exact, is 20 percent lower than in the first half of last year. Why the number of blocked accounts is lower is not clear. Twitter says that 95 percent of the microblogging system has been detected. It is then software that is able to filter certain messages and take action against the distributor.

The internal system is getting better in filtering messages. In addition, the software can already filter and remove unwanted users before they can spread.