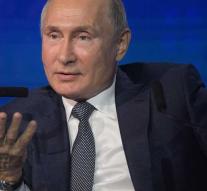 san francisco - Twitter has blocked a user who wanted to believe with his account that it was from Russian President Vladimir Putin. The company closed the account after a complaint was filed by Russian officials, says a spokesperson for the social medium.

The user @putinRF existed since 2012 and had a million followers. Reports were mainly published that refer to official Russian government sites. It is not clear who is behind the account. The Kremlin was not available for comment.