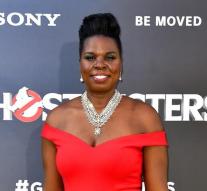 - Twitter takes action against users who bother others. Which are permanently excluded, the company has announced to Recode. Following the diatribe that actress Leslie Jones got. Jones, who plays in the new Ghostbusters movie, shared the tweets on her account.

One of the blocked accounts of a reporter Breitbart. Jones had called a guy and wrote that she could barely read. Others compared her with an orangutan, a gorilla and King Kong.

Twitter wrote in a statement: '' We know that many people feel that we have not done enough against such behavior. We agree with that. ''