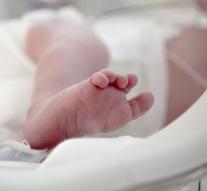 - An Australian woman who was told she would probably never get pregnant, gave birth to twins. The two girls are conceived ten days apart.

The woman from Brisbane underwent hormone treatment for a condition that caused them not ovulated. During the treatment she got pregnant twice while she had only once community. This was possible because of the extremely rare situation superfetation. The hormone treatment triggered the superfetation which the woman was re-impregnated during her pregnancy.

'We did not realize how special it was until the moment they were born,' the woman told the Australian Seven Network. The twins, which is officially no twins because of superfetation, was born ten months ago. The two girls differed in height and weight.

Only ten other cases of these rare conception are known. The father had an explanation. 'Hole-in-One likely. '