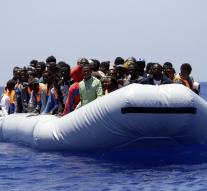 - About twenty African migrants missing at sea after their boat was wrecked on the Atlantic Ocean. The incident happened late Tuesday night, about 30 kilometers from the coast of Western Sahara. The Spanish rescue team managed to rescue 22 men.

According to the survivors, who have been in Gran Canaria, there were about forty people on board, including one woman. One death has been recovered.