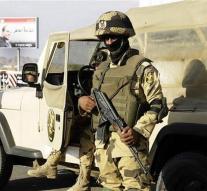 - Islamic extremists have Friday twelve Egyptian soldiers shot dead during an attack on a checkpoint 40 kilometers from the town of Bir al-Abd, in northern Sinai. Eight soldiers were wounded. Which are admitted to a hospital in el-Arish.

The Egyptian security services suspect that the gunmen have ties with IS. They made use of semi-automatic rifles and a few heavier weapons. It is the first time that members of the terror strike in this part of the Sinai.