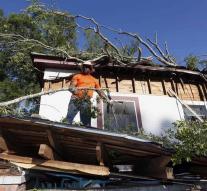 washington - Floods in the states of Arkansas and Missouri have killed twelve people in recent days.

Due to severe weather, rivers ran out of their banks. Especially the northeast of Arkansas had a bad deal. After several dams made it happen, a large part of Randolph County came under water. In Arkansas, seven dead have so far been killed.

In Missouri, five people were surrounded by floods. According to meteorologists, the situation will deteriorate further this weekend. Especially the Mississippi and Missouri rivers will rise even further, they fear.