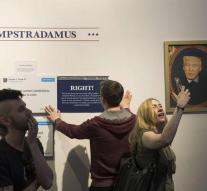 new york - A temporary exhibition with the most prominent tweets of US President Donald Trump is opened within walking distance of his Trump Tower in New York. The 'Donald J. Trump Presidential Twitter Library' was designed by American media by the comics behind the satirical news program The Daily Show.

Visitors to the exhibition, which is open only this weekend, can send tweets themselves while sitting on a golden toilet. They can also read the President's twitter messages, which are hanged in the wall, among other things. The text messages are divided into categories as 'constructive criticism' and 'deleted but not forgotten.' '

Daily Show presenter Trevor Noah compared the tweets of Trump with art. 'He may not be good at his work as president, or lead, or geopolitical; But he is an excellent twitter, 'joked the comedy. The president has more than 32 million followers on the message site.

The so-called presidential library immediately became a hit. There was a long row of people who wanted to take a look at Friday night. According to visitors, the exhibition is worth it: 'It's hilarious. I could not stop laughing but was also shocked, 'said a certain Mark.