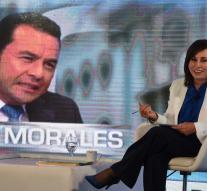 - The popular TV comedian Jimmy Morales has great chance Sunday to be the new president of the Central American Guatemala. In an extensive survey Wednesday by the newspaper Prensa Libre was the candidate of the Nationalist Party FCN count on support from no less than 67.9 percent of voters.

This percentage is twice as large as that of the Social Democratic candidate Sandra Torres, who scored 32.1.

The presidential election in Guatemala has two rounds. At the first on September 6 Morales was surprising winner emerged from the bus. He took advantage of the continuing bickering of the candidates of the other traditional parties.

What it also helps is a scandal for months rampant corruption among the political elite. So are former President Otto Pérez and his place replacement Roxana Baletti because of a donation in prison.