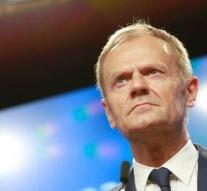 brussels - In an open letter, EU president Donald Tusk urges his countryman and president of Poland Andrzej Duda to urgently discuss the 'political crisis in our country' on Thursday. 'It is up to us to avoid a gloomy run that can lead to the marginalization of Poland in Europe,' Tusk writes, ending his statement with 'Please, let's try, Mr. President.'

Tusk invited Duda for an 'urgent encounter' on Wednesday. However, Duda canceled the invitation, confirming EU sources. In his statement, Tusk, who was Poland's premier leader for Poland until 2014, wrote that 'recent actions are against European values ​​and standards and threatening our reputation'.

Tusk focuses on new legislation that gives the Government Party Justice and Justice (PiS) enormous influence on the judiciary. According to critics, these laws threaten the independence of the rule of law.