Home / World / Tusk: not in line with Trump over Russia 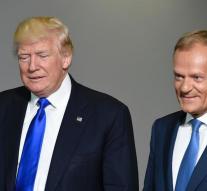 brussels - 'I'm not 100 percent sure of that President Trump and I share a common position or the same opinion about Russia. On the other hand, we appear to be in line with the conflict in Ukraine. 'That's what EU President Donald Tusk said in Brussels on an unexpected short statement on Thursday after his meeting with the new US president.

'My main message to Trump is that cooperation and friendship are based on common values ​​and principles, such as freedom, human rights and respect for human values. Our main task is bringing together the whole free world around those values, and not just interests. '

According to Tusk, who represents the EU leaders in Brussels, there are 'many things we agree with, especially the fight against terrorism. I do not have to explain why '. But it seems less about climate and trade.

Donald Trump was received on Thursday in the Tusk Tower, with a blow to the Trump Tower in New York, a newly built building in Brussels, where the European summit takes place. Trump arrived late in his first appointment with the highest Brussels representatives, just over a quarter of a quarter, but the planned appointment at 11 o'clock ended in half an hour.

After the two Donalds had shaken hands, they disappeared. Twenty minutes later, they returned with President of the European Commission, Jean-Claude Juncker, for a photograph of the US and EU flag representing the 28 member states. Trump was kidding the vast number of countries and leaders in Europe.

The meeting, after which also the President of the European Parliament, Antonio Tajani and Foreign Minister Federica Mogherini, had no official agenda. Tusk said foreign policy, security, trade and climate had come about. The meeting was intended primarily for 'acquaintance'.

Trumps visit was excited. There was some doubt about his intentions with the relationship between the EU and the US. In particular, his comment after the announced departure of Britain from the EU, which would follow several countries, was wrong in Brussels.