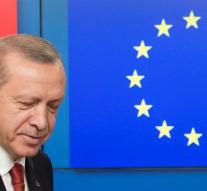 brussels - EU President Donald Tusk raised human rights in Turkey during an interview in Brussels on Thursday with President Recep Tayyip Erdogan. That twittered Tusk after the end itself.

Tusk had invited Erdogan, in Brussels for NATO, on behalf of Chancellor Angela Merkel for a conversation. The EU Member States and the European Parliament are deeply concerned about developments in Turkey. The candidate for the EU is getting more and more European values. Erdogan is even considering reinstatement of the death penalty.

The President of the EU Parliament, Antonio Tajani, also spoke with the Turkish leader. Tajani reported that it had been a 'constructive' consultation. 'We are now waiting for a positive signal about the death penalty and freedom of the press. '

Furthermore, nothing has been brought out about the conversations. EU leaders are discussing the relationship with Turkey to be expected at a summit in June.