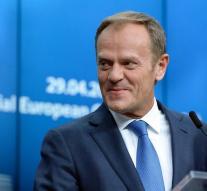 brussels - If Brussels and London start to quarrel before the Brexit negotiations have begun, they become 'impossible.' That said EU president Donald Tusk on Thursday in Brussels. 'These negotiations are hard enough. The interests are too big to make our emotions go. '

Tusk tried to get rid of the cold that occurred after leaking the conversation during a working dinner with British Prime Minister Theresa May last week with European Commission President Jean-Claude Juncker. The Brussels delegation would be perplexed about the naive and stubborn arrangement of May about the forthcoming negotiations on divorce.

May accused politicians and officials in Brussels, then, of voting and blending themselves in the British elections of 8 June.

'The interests of millions of people on both sides of the Channel are at stake,' said Tusk. 'We must not forget that in order to succeed, we now need discretion, restraint, mutual respect and a maximum of good will. '