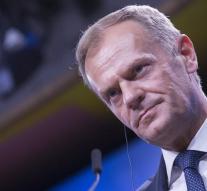 brussels - The British decision to leave the European Union may be reversed if it lies with EU president Donald Tusk. 'The EU was built on dreams that seemed impossible to fulfill. So, who knows? You could say I'm a dreamer, but I'm not the only one. '

The Polish prime minister made his statements for the start of the summit of government leaders meeting in Brussels on Thursday and Friday.

The brexit negotiations were abolished on Monday. It promises all to be very complicated, because the government of Prime Minister Theresa May has no clear parliamentary majority. May gives an explanation of the British position to her colleagues on Thursday evening.

In principle, the British are no longer a member of the EU as of the end of March 2019. Several European politicians have already expressed the hope that the British think.

The EU is going well, but we must be 'extremely careful' with optimism and not complacent, Tusk said. He pointed to economic growth in all the Member States, the lower unemployment rate and the financial deal with Greece. He also appealed to the electoral defeat of anti-European parties and victories of leaders who are '100 percent pro-EU'. 'From Bulgaria and Austria to the Netherlands, and of course France. '

For the new French president Emmanuel Macron, it is the first EU summit.