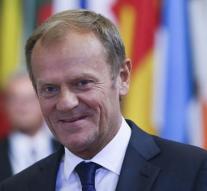 brussels - EU President Donald Tusk congratulated Theresa May on her reappointment as prime minister of the United Kingdom. He did that in a letter on behalf of the European Council of Government leaders on Friday.

'Our shared responsibility and urgent task is now to conduct the negotiations on the British departure from the EU in the best possible atmosphere,' the Polish writes. With as little disturbance as possible for our citizens, companies and countries after leaving in March 2019, he adds.

The timetable as laid down in Article 50 of the European Convention leaves us little time, Tusk recalls. In order to facilitate the work of the negotiators, he promises to maintain 'regular and close' contacts with May.

Tusk says it looks forward to welcoming May at the summit of government leaders, Brussels, 22 and 23 June. There are subjects such as terrorism, security, defense, trade and the climate agreement of Paris on the agenda.