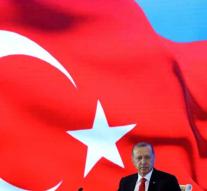 ankara - More than 12 million Turkish pensioners, or 15 percent of the population, can expect a check from the government a week before the parliamentary and presidential elections on June 24th.

According to the ruling AK party of President Tayyip Erdogan, this payment will be the first of two that are intended as a compensation for national holidays. Critics see it as an expensive way to buy support for Erdogan. The two checks of 1000 lira each (about 200 euros) cost the Turkish state a total of nearly 4.9 billion euros.

The idea of ​​paying cash to retirees was originally proposed by the main opposition party in the run-up to the elections three years ago. This led to criticism from Deputy Prime Minister Mehmet Simsek. He said the party would earn the Nobel Prize and get his vote if the party could find out how to meet those promises without increasing debt, raising the current account gap or 'leading Turkey into crisis. '