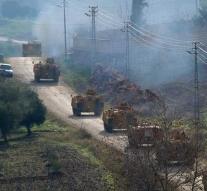 damascus - According to the Syrian Observatory for Human Rights, Turkish troops and allied rebels have conquered a village in northwestern Syria after fighting with Kurdish militias.

The observatory, based in the United Kingdom, reported that the village of Shankal, which is close to the border, was occupied by Turkish troops. Ankara had previously announced a ground offensive in the northwestern region of Afrin, in which the Syrian-Kurdish militias, which are called People's Protection Units (YPG), serve the service.

According to the human rights activists, Shankal is the first conquered place in Kurdish territory.