Home / World / Turks angry at refusal Türkes in the Netherlands 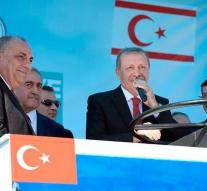 istanbul - The Turkish Ministry of Foreign Affairs has once again taken hard to the Dutch government, as Turkish Deputy Prime Minister Tugrul Türkes is not welcome in our country.

The Turkish media report it prominently on their websites and the responses, also on social media, do not go out. 'Naughty Nazis', lets Ali Kumas know on Facebook. Zeshan Ahmad also states that the Nazi mentality lives in Europe. After the Netherlands refused to allow two Turkish ministers in propaganda for a referendum in Turkey in March, President Erdogan had already mentioned a Nazi mentality.

'What about the Dutch who are not welcome in Turkey,' Pam Demirbacak asks. Others think that the Netherlands contributes again if our politicians need money or, as Selim Kacar says, joke the need for Turkish voices to form a government. Many Turks find that the Netherlands, with the ban on speaking the Deputy Minister, proves to be a disgrace democracy.

The Alptekin Akdogan, living in Utrecht, twists that the Netherlands has the right to refuse a deputy minister, but in the end, the Netherlands will not win anything and the refusal will only yield losers on both sides.

Türkes wanted a memorial celebration on Tuesday because of the failed coup in Turkey a year ago. The Turkish Deputy Prime Minister was invited to a memorial of the Union of European Turkish Democrats (UETD) announcing the event taking place on July 11 at the Orpheus conference center in Apeldoorn on the Facebook page.

The Cabinet considers that a visit by a Turkish governor to our country is not desired at this time, the Ministry of Foreign Affairs reports on Friday. The moods between Turkey and the Netherlands are high at the beginning of March when the cabinet refused to speak Turkish officials in the Netherlands in the context of a Turkish referendum. The plane with the Turkish Foreign Minister could not land and the Turkish Minister of Family Affairs had to leave the country under police guidance.