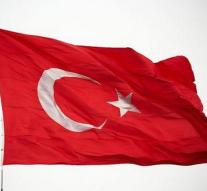 istanbul - Hundreds of Turkish women went to Istanbul on Saturday to argue for the right to choose their clothes themselves. They are increasingly confronted with verbal and physical violence because of their choice of clothes, which in the eyes of some men is not conservative enough.

The protest march began on the Asian side of the city. Women scanned slogans as 'we will not obey, be silenced or afraid'. A number of participants had taken short jeans to show what clothes some men would say unacceptably. Other women argued for the right to wear headscarves from free will.

Several women have been belated in the city over the last few months because of their choice of clothes. For example, video images of a girl shot by a man in a bus while the driver appeared, appeared. That happened because the victim carried a shorts during Ramadan. 'Do not be ashamed to dress you like this during the Ramadan,' the attacker asked the young woman.