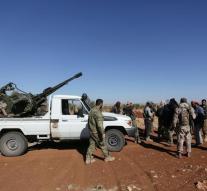 - Three Turkish soldiers were killed and seven injured in an attack by Islamic State in Al-Bab region in Syria, report sources at Turkish hospitals Thursday.

support Turkish military offensive by Syrian rebels in the region against IS. The wounded soldiers were taken to hospitals in the Turkish border provinces of Kilis and Gaziantep.