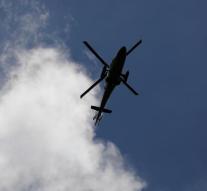 istanbul - Thirteen Turkish soldiers died on Wednesday because the helicopter that they were in crashed. That happened in the province of Sirnak in southeastern Turkey, according to Turkish media.

Sirnak's governor's office stated that the Cougar-type device had hit a high-voltage cable a few minutes after taking off in Senoba.