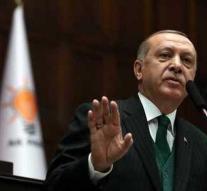 athens - The eight Turkish soldiers who fled to Greece almost two years ago may, more than ever, hope that they will have political asylum. The Greek state radio ERT reported on Wednesday that the highest administrative court has ruled that one of the persons involved must obtain a permanent residence permit.

According to lawyers, that decision also means good news for his seven companions, because there is now precedent action. Judges must also take this ruling into account in the other cases.

After the unsuccessful coup in the summer of 2016, the Turks went to Greece with a helicopter and requested asylum. This put the relations between the two neighboring countries under tension. The Turkish president Recep Tayyip Erdogan demanded extradition. Justice in Greece refuses so far because the eight do not have a fair trial to expect.

Turkey has been holding two Greek soldiers since the beginning of March, who have accidentally crossed the border river Evros. The government in Athens speaks of a hostage, which in Ankara of espionage.