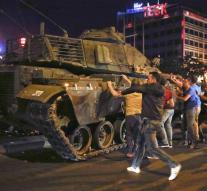 - The headquarters of the Turkish intelligence service was attacked during the overnight coup attempt by military helicopters and heavy machine gun fire. Thereby are at least three people were injured, said a source of the service.

The intelligence chief Hakan Fidan, was during the events in a safe place and was in constant contact with President Recep Tayyip Erdogan and Prime Minister Binali Yildirim, the source said.

The Secret Service was on Saturday along with the armed forces, the police and the government engaged in ongoing operations in Istanbul and Ankara.