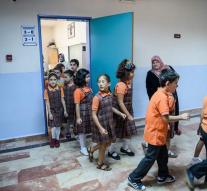 - "In Turkey on Monday the new school year began with a minute of silence and a prayer. More than eighteen million pupils were thus shut down the beaten coup two months ago. Many watched in classrooms at another face."

"Immediately after the putsch sacked or suspended the Erdogan government tens of thousands of teachers who were having their suspected links with the United States living preacher Fethullah Gulen. This is considered the evil spirit behind the coup."

"Were also more than 11 000 adults school employees dismissed because of links with the outlawed Kurdistan Workers' Party PKK. According to the government there are in Turkey more than 850 000 people active in education."