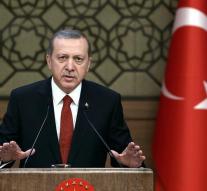 - The feud between Russia and Turkey over the shooting down of a Russian fighter near the Syrian border have no effect on joint energy projects. That the Turkish president Tayyip Erdogan said Saturday.

Russia imposed trade sanctions against Turkey, including the shutting down of investment projects and restrictions on food imports. Russia took this action after the Turkish Air Force last week's plane was shot down near the Syrian border a Russian bomber who took part in shelling on militants in Syria.Russia annually imports about $ 1 billion in Turkish food and other products and is Turkey's biggest supplier of energy, gas, coal and oil. Russia would also build the first nuclear power plant in Turkey. This project at the Akkuyu town costs about 20 billion dollars.,null, There is still no sign that the problems with Russia will affect projects with natural gas and the Akkuyu nuclear plant, '' Erdogan said in a speech to businessmen, which was broadcast live by news channel NTV.He denied Russian claims that Moscow negotiations with Turkey on the planned Turk Stream gas pipeline was suspended. Erdogan:,null, Just the opposite is the case. This project we have put stop because it did not meet our requirements. ''According to Erdogan, the problems with Russia no negative impact on the Turkish economy.,null, Turkey does not fall over because your importation of one billion dollars. What does it matter whether you buy or not. We will find other sources behind other doors. ''
NEW