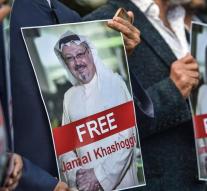 ankara - The Turkish authorities think that the Saudi journalist Jamal Khashoggi is dead. He would have been killed when he visited the Saudi consulate in Istanbul to fulfill some formalities. Two sources have said this to the Reuters news agency.

'We believe that the murder was premeditated and the corpse was then removed from the consulate,' said one of the spokesmen. They did not explain why the police assume that Khashoggi, who regularly criticized the Saudi government policy, was eliminated.