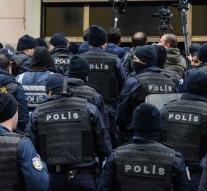 ankara - The Turkish police arrested 12 suspects in an investigation into Islamic State in Ankara. According to the state press agency Anadolu, the arrests came a few hours after the report that the US embassy in the city would remain closed all day because of a 'security threat.'

The twelve suspects belong to twenty people for whom the Turkish judges have issued arrest warrants. They are all foreigners who would recruit new members for the extremist group.

The Turkish authorities regularly collect suspected IS members. It is unclear whether there is any connection between the latest arrests and the temporary closure of the US embassy. According to Anadolu, the police action was 'planned earlier. '

Sunday evening, the embassy in Ankara reported Monday to remain closed to the public because of a security threat. The representation advised Americans in Turkey to avoid large crowds and the embassy building. The embassy did not go into details about the threat.

The office of the governor of Ankara reported that the extra security measures were taken after American intelligence officials had pointed out that an attack could take place at the embassy or in places where Americans are.