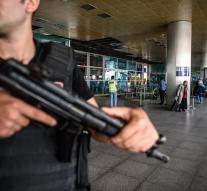 Counterterrorism units raided the police in three class districts of Istanbul, Pendik, Basaksehir and Sultanbeyli. Nine suspected militants who were in contact with IS fighters in Syria, were arrested during raids in three districts in Izmir, said the news agency. They are suspected of financing, recruitment and providing logistical support to the Sunni terrorist group.