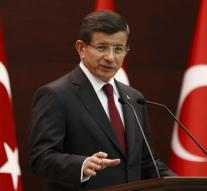 ankara - The Turkish prime minister Ahmet Davutoglu of the ruling AK Party has to work the other political parties called together a new constitution. He proposed Sunday after the parliamentary elections to jointly work towards a Turkey that is free from conflicts and tensions.

The AK Davutoglu and Minister Recep Tayyip Erdogan received nearly 50 percent of the vote and therefore has 316 of the 550 seats in parliament. The outcome of the AK can again govern without a coalition partner. But the 316 seats are not enough to hold a referendum on changing the constitution. This requires the support of 330 parliamentarians. Via a constitutional amendment would be more powers to be given to Erdogan, the founder of the AK.