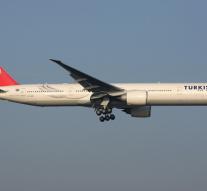 - A Turkish Airlines plane landed early Sunday morning in Canada, because there was a bomb threat made ​​. The unit with 256 people on board was en route from New York to Istanbul.

The plane has safely landed at Halifax Stanfield International Airport in southeastern Canada. Canadian police investigating the bomb threat, according to ABC News. Explosive detection dogs are being used to search the device and the luggage.

The authorities have recently been extra alert to bomb threats following the attacks in Paris last week and the crash of a Russian plane over the Sinai desert.