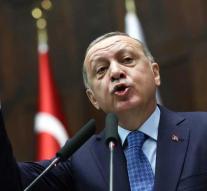 ankara - The Turkish parliament on Friday agreed to a proposal to hold early elections. Turkish voters are now going to the polls on 24 June to elect a president and parliament, more than a year earlier than originally planned.

Not all parliamentarians agreed with the proposal. Members of the pro-Kurdish HDP protested in the hall. Previously opposition party CHP had already indicated that no elections can be held while the state of emergency is in force, but that seems to be happening anyway. The parliament, where the AK party of President Erdogan is in the majority, extended the emergency situation Wednesday by three months.