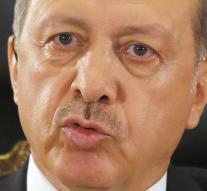 ankara - The Turkish parliament on Thursday formally approved the state of emergency as President Recep Tayyip Erdogan, who declared Wednesday. Of the 550 delegates showed a large majority of 346 MPs for the emergency.

Even opposition members rallied behind Erdogan. His AK Party has 317 seats in parliament.

Erdogan called on Wednesday after a meeting of the National Security Council for three-month state of emergency. He did so in response to the attempted coup by soldiers late last week. He said among other things that he will act as president and as head of the army to remove that way,, the virus 'from the military ranks.

Istanbul was evident Thursday on the first day of the emergency little. Shops, cafes and restaurants were open as usual and there were no more security than other people to see.