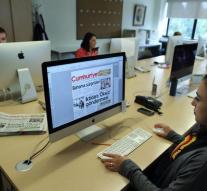 - The editor of the Turkish opposition newspaper Cumhuriyet, Murat Sabuncu, was arrested by the police. Sabuncu was not long in office. The previous editor, Can Dündar was sentenced in August to six years in prison for publishing state secrets. That conviction led to much criticism of the leadership of President Tayyip Erdogan and the curtailment of freedom of expression and human rights under his rule.

According to the Turkish branch of CNN also houses investigated by other employees of the newspaper. There were issued arrest warrants for a total of thirteen members of Cumhuriyet. Meanwhile also arrested one of the journalists of the newspaper.

The arrests follow a weekend in which Turkey fired another 10. 000 officers and closed fifteen media channels. All are suspected of links with militant groups and the Gülen movement. There were dismissed or suspended more than 100 000 people and 37 000 people have been arrested since the failed coup.