Home / World / Turkish opposition leader shot at in his car 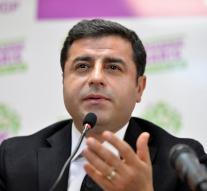 - The leader of the leftist Kurdish opposition party HDP in Turkey, Selahattin Demirtas, has survived an attack Sunday in the southeastern Turkish city of Diyarbakir populated by Kurds. It was shot at the armored car in which the charismatic politician SAT. There is a bullet in the bullet-proof window glass found at the height of his head. The politician was unharmed. " God decides on the death," he tweeted later.

Demirtas is a popular politician who bring pro-Kurdish party in both Turkish parliamentary elections this year to above the threshold of 10 % did. He wants peace between Turkey and the PKK and is therefore often threatened by Turkish nationalists.

In two attacks this year against leftist Kurds in Turkey, in July in the border town in Syria Suruc and in October in the capital Ankara, were slain by Turkish adherents of the Islamic State and more than 34 100 people respectively. Most victims were Kurdish youths. His party offices of the HDP regular target of attacks by Turkish nationalists.