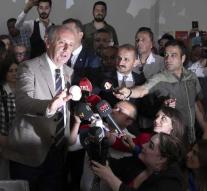 ankara - The largest opposition party CHP has called on the Turks to come to the building of the National Electoral Council in Ankara to demonstrate and to keep going until the dawn. Spokesman Bülent Tezcan said Sunday that news agency Anadolu, the only official source for preliminary results, continually misrepresents.

'We call on all citizens in the 81 provinces to go to the election committee in their district. Keep watch there, and also in Ankara, until Monday morning early, 'said Tezcan.

With over eighty percent of the votes counted, President Erdogan according to Anadolu at 53 percent, while the CHP's own information indicates less than 48 percent. Their candidate Muharrem Ince is around 30 percent. The pro-Kurdish party HDP, which does not have a list connection, would be able to reach the 10 percent electoral threshold.