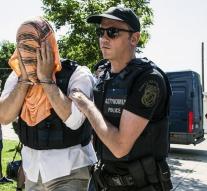 athens - Eight Turkish officers who transferred after the coup attempt in Turkey to Greece fled in a helicopter of Alexandroupolis in northern Greece to Athens. Which sources have confirmed to the police Friday in front of Greek media.

A lawyer of the soldiers expressed concern about the transfer. The eight were Thursday by the court in Alexandroupolis to two months in prison sentenced conditionally, because they had entered Greece illegally. Their request for political asylum is treated separately. The asylum procedure can take several months. Turkey insists that soldiers are sent back.