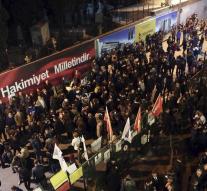 - The Turkish newspaper Cumhuriyet does not leave it at that. Despite the arrests Monday of the editor and a dozen others, the newspaper appears. In the Tuesday edition takes the editorial stand against the 'blow against the free press.'

'We do not give up,' headlines the paper Tuesday on the front page. Cumhuriyet is one of the few remaining Turkish newspapers critical reports about the government. The authorities accuse chief Murat Sabuncu and other employees of having committed crimes on behalf of Kurdish militants and the organization of Islamic cleric Fethullah Gulen. The Turkish government sees both groups as terrorist organizations.

The Right Livelihood Foundation awarded the editors of Cumhuriyet in September a prize for their 'courageous investigative journalism and commitment to freedom of expression while facing repression, censorship, imprisonment and death threats. 'The foundation's award is also known as the alternative Nobel Prize, although there is no connection with the Norwegian committee.