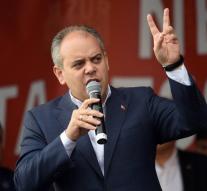 - The Turkish Minister for Youth and Sports, Akif Cagatay Kilic, managed to take shots of an interview with him for Deutsche Welle. This has informed the internationally oriented German broadcaster Tuesday.

,, After the Minister had left the room, suddenly announced his press spokesman that DW was not broadcast the interview, '' said the broadcaster. There was no explanation, but the DW team was given to understand that the recordings could not be brought out. The Ministry in Ankara declined to comment.

Kilic gave the half-hour interview Monday with Michel Friedman, a broadcast in the series 'Conflict Zone'. The series is defined by Deutsche Welle as,, confrontational interviews with international decision-makers. '


Kilic (40) was born in Germany. Later he was educated at the German School in Istanbul. Since 2013 he has been Minister for Youth and Sports.