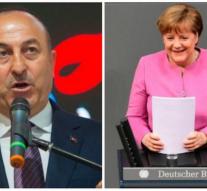 bern - Turkish Foreign Minister Cavusoglu has expressed himself praised Chancellor Angela Merkel. 'Not just for Germany but for Europe, Ms. Merkel a very courageous person. They are looking for solutions to the problems, 'Cavusoglu said in an interview with the Neue Zürcher Zeitung in Switzerland.

The Turkish minister once again called for the creation of a safe zone in Syria, so that refugees can return. That would be a relief for Europe, but if on the other hand by traveling to Europe, 'Mrs Merkel is to be under the most pressure. 'At the same time Cavusoglu threatened the refugees agreement with the EU to say if visa-free travel for Turks in the EU is not implemented quickly.

Cavusoglu will address Turkish citizens Sunday in Zurich. The city council still unsure whether it can continue in relation to public safety.