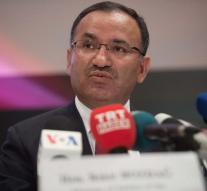 istanbul/berlin - The Turkish Minister of Justice is angry because he can speak Thursday night no compatriots on the referendum in Turkey. Bekir Bozdag calls it 'unacceptable' that the city Gaggenau forbade the meeting due to the expected large number of visitors. He canceled a meeting with his German counterpart Minister of anger.

According to Turkish media, the German Justice Minister Heiko Maas Bozdag had requested an interview Thursday night would take place in Karlsruhe. He wanted to talk to him about the arrest of the German-Turkish journalist Deniz Yücel in Turkey.

The Turkish minister had agreed to talk but he left after deleting his performance in Gaggenau that he immediately returned Thursday after a visit to Strasbourg to Turkey. Volgens Bozdag freedoms of expression and of assembly are in Germany ignored. 'What is this democracy?' He wondered Thursday.

In Germany criticism of Turkish ministers who come to win votes for the referendum.