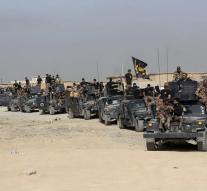 mosul - Iraq is a major military operation launched to recapture the city of Mosul on terror organization Islamic State. That report Turkish and Iraqi media.

US artillery was 20 kilometers from the city, projectiles are fired at IS targets east of the city, said a commander of Peshmerga fighters. The Americans, however, denied that the attack has begun. According to CNN, the Iraqi army Saturday thousands of leaflets four pages over the city strewn with lyrics like, it's time for the victory and, time for a clean Iraq without Isis or another dark faith. 'It is also common in the flyer that an attack is being prepared.

Residents are asked from some parts of the city and to stay away from ISIS goals, not to panic and keep windows and doors closed.

Mosul is the second biggest city in Iraq. The city is of great strategic importance for IS.