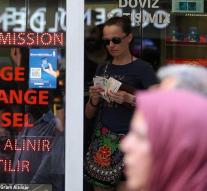 - The Turkish lira was slightly up in value on Tuesday after the heavy loss of Monday. Traders provide a new sales spurt in the afternoon. Possible diplomatic consultation in the US offers some relief.

'But the underlying currency remains under heavy pressure because of the great uncertainty about the continuing inflation and political instability,' says Bart Hordijk of Monex Europe.

Investors searched in other products on Monday, the currency lost 4.6%. Toward the night to Tuesday, the pair of coins went to a depth record since the military coup in 2016, to gain some ground this morning when local parties bought the lira.

Hordijk: 'Presumably parties that buy at a low point. Basically, the problem for Turkey has not changed. '

A Turkish government delegation will travel to the United States to try to solve the problems between the two countries, reports CNN Türk on the basis of diplomatic sources.

As soon as the trade on Wall Street opens at half past four on Tuesday, more sales pressure is expected, according to De Nederlandsche Betaal \u0026 amp; Exchange Company (NBWM).

'There is really a capital flight from the lira. Very worrisome. In the past few days, it seemed as if large parties were throwing the towel after President Erdogan said he did not want to raise interest rates, and that did not happen, 'according to director P. J. Datema of the NBWM.

'The fact that the central bank does not appear to be independent in its interest rate policy is worrying for markets', says Datema.

This year the lira has become worth 38% less against the US dollar.

President Erdogan called on Turks to take their euros and gold from under the pillow and swap them for the lira to prop up the coin. That may have led to some support. ' That opvere of the lira is amazing. '

The worries also translated into the yield on sovereign debt. Ten-year loans have gone to record highs, with 24 basis points up to 19.91 on Tuesday.

The increase is attributed to the prospect of new loans to be issued. In size, however, they are more limited than previously expected, according to Bloomberg.

According to merchant bank Nomura, Turkey can not escape the interest rate to at least 20%. 'And to say to the market not to be afraid to raise that interest further. Anything other than that promise will not prove to be effective, 'said analyst Gullberg of Nomura.