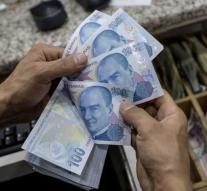 ankara - The Turkish currency is rapidly losing value. On Thursday, the lira reached a tentative low against the US dollar with a loss of another 4 percent. The depreciation of the currency this year is already more than 30 percent, with the result that the already hefty inflation in the country threatens to run even further. This makes life for people in the country increasingly expensive.

The currency is also under pressure as a result of concerns about the growing conflict between Turkey and the United States. Earlier this week, the currency also lost about 5 percent in value after the US announced that it was looking at Turkish exports to the country.

There are also concerns about the influence that the Turkish president Recep Tayyip Erdogan has on the policy of the Turkish central bank. Erdogan is opposed to raising interest rates and recently appointed his son-in-law as Minister of Finance. Experts believe that rapid intervention is necessary.